Their Ezekiel bread is based on a recipe found in the Bible that was given to the prophet Ezekiel as his only substance for 390 days. The Ezekiel bread, made from lentils, pulses and grains, has a complete amino acid profile. This bread is a perfect little nutritional package and 20 Shekels has fine-tuned the flavor perfectly. I can literally live off this bread for the next 90 days days of my journey if I wanted to. Seriously, I can. 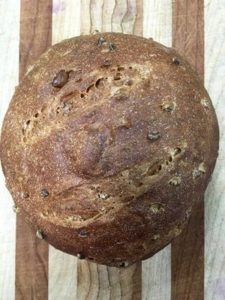 The Ezekiel Bread uses 6 key ingredients that makes this loaf a protein and nutrient dense loaf.

The  Muesli bread is also made with 100% sprouted wheat flour. Sprouted flour has a lower effect on blood sugar, and 20 Shekels has a loyal base of customers with diabetes. The breads that I tasted here were not too sweet, so I doubt if these breads would have a high glycemic index. 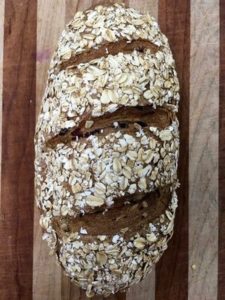 The Muesli has 4 different fruit and 6 different nuts that give it its savory and sweet profile.

I spoke with 20 Shekels’ owner Marni Atherton and she shared her passion for her breads with me. Each and every bread is crafted carefully to provide great nutrition that is aromatic. They just recently launched their on-line sales of bread and things have taken off. 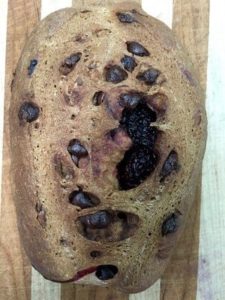 The chocolate blackberry loaf is loaded with rich dark chocolate and tart blackberries.

This is due to the fact that her customers love that their breads are baked fresh especially for them. Batch baking each flavor allows 20 Shekels to cater to the demands of an ever-changing population of bread lovers.

I booked an appointment with the production lead at Grand Central Baking Co’s first location today. I wanted to capture a Facebook LIVE event showcasing the bread at their first location and also pick up some awesome sourdough bread.

We started our day with a walk to a nearby Skillet restaurant. Skillet started as a food truck in Seattle, and has grown into a restaurant chain. Did I mention you can judge a restaurant by its bread? I had the Serious Toast, and it was made with a smooth and rich brioche bread. It was UNBELIEVABLY heavenly!

Just look at that toast!

Since this meal came with egg and ham, I gave those away to both my high school friends (who are still puzzled why I am eating so much bread).  I couldn’t finish the double decker French toast, so I had to doggie bag it. This was half (over 250g) of my day’s consumption of bread right there. I finished them up later in the day.

A visit to Grand Central Baking

After breakfast, we made it over to Pioneer Square. Toured the first Grand Central Baking location, then wolfed down some pastries and more bread. Michael, the production lead at this location, gave me a potato roll which I finished within 12 minutes during the FB live recording. The sour of this roll was so smooth and soft.

Easy to say, that was the best-tasting potato roll I ever had. Why? Because they take a Yukon potato, skin it, cube it and mix it into the sourdough. Who in the world takes the trouble to do this? Doesn’t it show you how much passion they have for the thing they love most – making the best bread in the world? I get impressed by Grand Central Baking every time I talk to them. Their passion is evident why they remain successful. 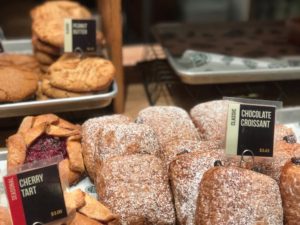 We walked a whole 8 miles! This cost me 800 calories. Which meant that I could eat some more bread for dinner! I told my friends (both Asian) that we cannot eat at any noodle or rice restaurant, and one of them replied “you are so not fun to travel with at this time; can’t you just drop your bread diet?” So we compromised on Agrodolce in Fremont, an Italian trattoria which served handmade noodles and pasta. 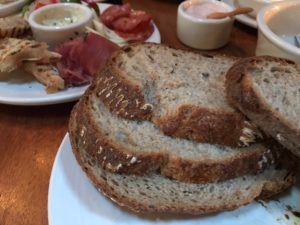 They brought out their Focaccia bread. Mama Mia! This was real Focaccia! What did I say about judging a restaurant by its bread? Agrodolce not only made delicious pasta, they really knew how to make a great Focaccia as well! While my friends both had pasta, I had antipasto misto, caramelized broccoli (which was out of this world) and tomato and fennel soup with my Rye Sourdough from Grand Central Baking. We also celebrated 30 years of friendship with Prosseco and Port (not such a great idea after looking at my calorie count). 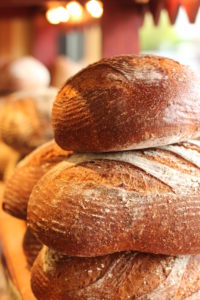 I brought the loaves to NedSpace, and that was the end of that. Everyone loved Grand Central’s bread, everyone ate it. None left for the #1 fan, my husband. The thing about artisan bread is that it is best eaten on the day it is baked. I think that resonates in everyone’s mind, like the bell to Pavlov’s dogs. When someone see the word Grand Central, it’s like an instant message that comes into their minds that instructs them to immediately devour the fresh loaves.

Even Jimmy Stanley from NedSpace, a self-proclaimed anti-gluten paleo fan, devoured a few fresh slices of Campagnolo. It reminded him of the days when he used to live in Italy, and he proclaimed that these were the best Campagnolo outside of Italy. We live streamed this Breaking Bread experience on Facebook, so please check it out on our BAKERpedia Facebook page.

I’ve not been to Italy, but I do know how to judge a loaf by its taste. The three breads I received today were Campagnolo – a hearty and mild sweet (from a touch of honey), rugged country-style loaf combining coarse wheat and rye flour and a mix of eight whole grains; Multigrain whole wheat – a hearty loaf in the style of German breads, with a great mouthful of chunky grains in every bite; and Peasant Levain Boule – a gorgeous loaf with a dark crust and distinctive tang. 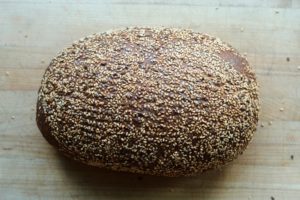 I loved the Peasant Levain Boule the best because it had an incredible chewy crust with a very moist and resilient crumb. Best of all, it was made from stone-ground whole wheat flour and rye meal.  Bread fans, have I made you hungry yet?

The sourdough technique that Grand Central Baking Company® uses is close to a 17 hour ferment. That means that all their breads will have a distinct light sour taste and a resilient chew to it. The slices from these breads were very dense, so I didn’t need to eat too many slices.

Each slice was about 56 grams, compared to the regular 43g/slice. This made a huge difference with the amount of slices I had to consume. Therefore, I easily finished all the slices by 3 p.m. today. Thank you Grand Central Baking Company®, for giving me a grand bread eating day! 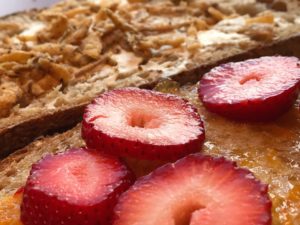 Onions on cream cheese; fresh strawberries on apricot preserves both served on a Peasant boule slice.