Is Artisan Bread Healthier than White Bread? Day 71 and 72

Centuries ago, eating white bread meant you had status. White bread was served to the elite classes while the peasants continued to suffer with crusty whole grain loaves. How the times have changed! I know everyone loves to hate white bread these days. It seems to embody the distrust consumers have of industrially manufactured foods. But are artisan breads like sourdough healthier than white bread?

The use of bleached flour and the addition of dough conditioners, emulsifiers, and mold inhibitors are seen as unhealthy and blamed for our modern health issues. As consumer preferences have begun to shift to more wholesome ingredients, artisan bread began gaining in popularity. 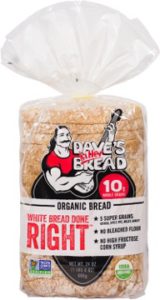 But what exactly is artisan bread and is it any healthier than industrially produced white bread?

Artisan bread is loosely defined as bread that is produced using traditional methods and ingredients.

Choice of flour type, length of fermentation, and how the bread is made are important characteristics for an artisan loaf. Dough is generally made in small batches with a more hands on approach. With the rise in popularity, the manufacturing of artisan loaves has been scaled up to embrace some modern conveniences. Due to the minimally processed and clean ingredient declaration consumers believe this to be a healthier bread.

A recent study tried to answer the question – Is artisan bread healthier than manufactured white bread?

The test showed no significant difference between consumption of traditionally made sourdough-leavened whole-grain bread or industrially made white bread on the participants. The study does point out that both types of bread had had very personal results on participants.

What are you telling me? Is there really no difference between sourdough bread and white bread nutritionally?

While one person might have a blood spike after eating white bread another may person experience the same thing eating artisan sourdough. Another measure that was dependent on individual participants was gut biome. The researchers found that the microbiota composition remained generally stable and person-specific throughout the trial.

So there you have it! There’s no nutritional difference between sourdough and white bread. This week’s white bread of choice? Dave’s Killer Bread White Bread Done Right. Mind you, their white bread has 10g of whole grains! 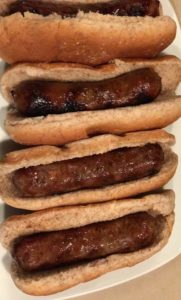 Bratwursts off the grill. Yum!