Steamed buns just might be the world’s most perfect food! Also known as Mantou, the history of steamed buns dates back over 2,000 years ago. The origin varies depending on who is telling the story. I discovered that Zhuge Liang (181-234), is credited with inventing the stuffed meat version of steamed buns.

Zhuge Liang was a military strategist on an expedition in southern China. Difficulties during the expedition called for the sacrifice of a human head to appease the gods. Rather than kill an innocent human, Liang ordered his solders to kill some of their animals. The meat was then placed in a flour dough and shaped like a head before being steamed. These fake heads tricked the gods and good fortune followed. It is our good fortune that Zhuge Liang created the first meat filled steam buns!

Today you can find steamed buns in many varieties. They can be plain or stuffed with meats, vegetables, or sweet fillings.

The simple combination of flour, salt, yeast and sugar is mixed together and allowed to rise. The dough is then cut into equal portions, filled, shaped, and placed in a steamer to cook. The result?  Bread so light it melts in your mouth. 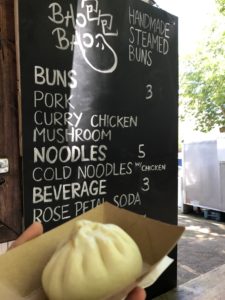 A handmade steam bun stuffed with pork from a food truck in Portland, OR.

Steamed buns are portable, delicious, and worthy of serving to the gods. For all the bread fans who want to try this form of bread, they are readily accessible at any Asian food supermarket in the frozen section. 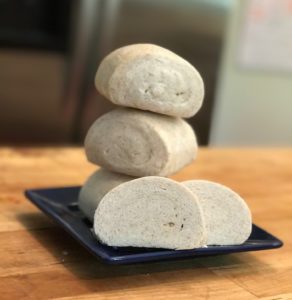 Whole wheat steamed buns (Mantou) are delicious and nutritious. They are usually eaten with stews, or eaten instead of rice or noodles.

For a look at how pork buns are made see this video. The technique the baker uses to shape the buns prior to steaming is a true art form! 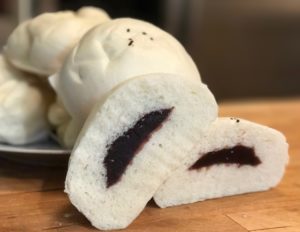 Sweet Azuki (Red) Bean filled steam buns are usually consumed as a snack or for breakfast. 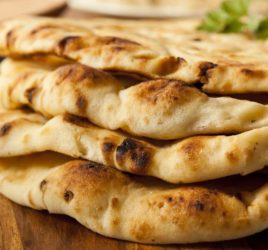