Two huge boxes came to my office stuffed with awesome loafs of fresh baked bread from Rotella’s Italian Bakery. Rotella’s bakery is in Nebraska and they bake for many QSR chains. I am thinking this amount of bread may last me a while. So the next few blogs you read will include Rotella’s signature bread. The buns that arrived just looked awesome. Not only was the Brioche Bun high in profile, it had a great chew with an incredible shine to it. I had to make hamburgers just so we could eat it. 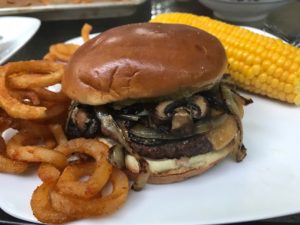 A delicious burger made with Rotella’s buttery Brioche bun, with a side of curly fries and corn on the cob.

I saw something really interesting in their line-up of buns that I’ve never seen before.  It looked like a bun, but tasted like a biscuit. So yes, they call it their biscuit bun. You know how you’ve tried to make a sandwich with your biscuit, and it falls apart because it’s too crumbly? Well, Rotella’s has the solution.

This particular bun, rich in butter with a biscuit-like taste, actually holds together very well.

So, that I put it under further stress by grilling it.  Why grill a biscuit bun? Because I felt it would crisp up real nice with all that fat, and it did! When I served a grilled ham and cheese on this biscuit bun at breakfast, there were calls for seconds. Least to say, this bun was a hit! 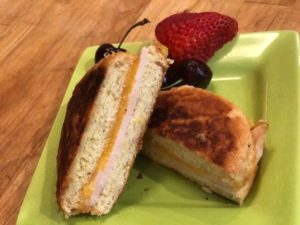 Grilled ham and cheese on a biscuit bun makes a great breakfast offering.

I am also impressed by the different sweet breads that Rotella’s offers up. The blueberry toast, cran-multigrain and raisin bread were great with just butter. It was also wonderful when used to make french toast. 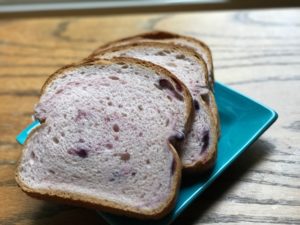