The basic process is the same.  The whole grains are ground and milled and the basic ingredients are the same today as neolithic bread. Bakers through the centuries have learned through trial and error how to make the best bread possible. And we’re still enjoy bread  today!

What is the most popular bread?

It depends on who you ask.  With all the varieties available, we all have our preferences.  According to research, the most popular types are French, Sourdough, Whole-wheat, Rye, and Multigrain.  And just like with everything else, trends change as new varieties are introduced.

On average how much bread is consumed in one day?

According to 2016 statistics, most households consume 1-2 loaves of bread per week. Over all, each of us eats about a ton of food each year.

Bread, like most tasty things in life, contains fat such as oil and eggs.  But it also contains healthy grains and ingredients our bodies need.  And relatively speaking, bread is lower in fat than foods made with bread, such as pizza, bread pudding, egg-bakes, and sandwiches, not to mention hamburgers and other delicious foods we love to sandwich between bread.

Sourdough bread was invented by ancient Egyptians by accident. They brewed a lot of beer and the yeast likely originated from that process and got accidentally mixed in with their unleavened bread ingredients. Then, poof! The yeast introduced air pockets into their flat bread, and the resulting bread was lighter and tastier. Then Egyptians recreated the process and began refining it to continue making improvements.

Why are there lines, crosses or other designs in bread loaves?

What we typically call Artisan breads today are loaves formed and baked on sheets rather than in pans.  Often the loaves are baked in wood fired brick ovens.  The designs and lines on the loaves create a distinct look, but also serve an important purpose in the bread baking process.  These lines, called scoring, are made by the baker just before putting the loaves in the oven.  The cuts create a weak spot on the surface of the loaves which prevents bursting, like poking holes in a potato before baking it to let the steam escape during baking.

How did Wonder bread get its name?

The name comes from its advertising campaign. Consumers were told by the media back in 1921 that a Wonder was coming and the name stuck. If you haven’t every squished and rolled a slice of Wonder bread in your hands, try it, it’s tasty.

Do I need to give up bread to lose weight?

In a word, no. Reducing overall calories and increasing exercise are the best ways to lose weight.  Bread and carbs are not the enemy, so toast on, my friend.  Enjoy slicing up a loaf and creating your new favorite sandwich.  Bread is one of the good guys! 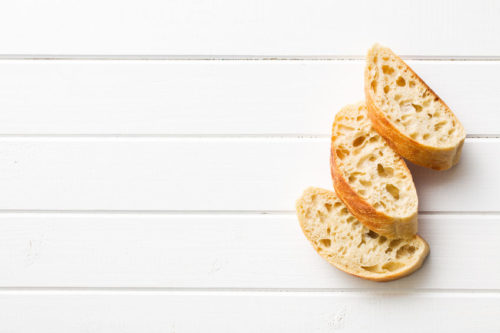