Hold the Salt! Sodium and Bread in Your Diet

On days six and seven of Dr. Carson’s bread diet we were faced with a bread myth we had hoped to bust – the high salt content in bread. It is a known fact that processed foods contain hidden salt. While most of us will not be consuming a pound of bread a day, adding spreads, deli meats, cheese, or soup can push our sodium intake over the limit of what’s healthy.

The result could mimic the effects of gluten intolerance than have led many to eliminate bread from their diets.  So, let’s take a closer look at salt.

Why is there even salt in bread and how much is safe to consume on a daily basis?

When we talk about salt, sodium chloride, and our health, it is the sodium that we need to be aware of. Food labels list sodium rather than salt.  2.5 grams of salt contain 1 gram of sodium. Sodium is a known part of salt, but did you know it is also in Monosodium glutamate and baking soda? If you are not looking at every food label you could easily consume more sodium than you need. The World Health Organization recommends under 2 g/day sodium (5 g/day salt) in adults.

Too much sodium intake makes your body hold water. Holding water can make you feel bloated or cause swelling. This is known as edema. On the other end of the spectrum too much salt can lead to dehydration. Symptoms of dehydration are extreme thirst, nausea, dizziness, stomach cramps, vomiting and diarrhea. In both cases consuming more water will help flush the excess sodium out of your system. 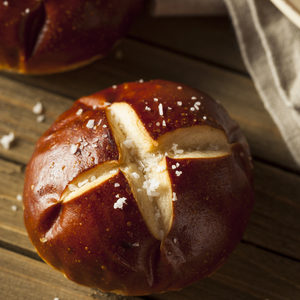 Back to the myth that bread contains high levels of salt.

The nutritional label on a bag of whole wheat bread by a national bakery lists the sodium at 240 mg per serving. A serving is 2 slices of bread. Not bad. That leaves 1.76 grams for your sandwich meat or marmite spread.

For the average consumer two slices of bread would make up 10% of your recommended sodium intake. Eating a pound of bread a day is another issue. The estimated sodium intake is 1.3 grams without any toppings or dipping into soup. I think it is safe to say that under a normal bread eating situation the salt level is well within the guidelines recommended by the WHO.

The Eat Bread 90 challenge is all about transparency. The pain that Dr. Carson experienced due to high sodium intake definitely caused a shift in her diet.

Do you think we busted the high salt myth or not?

To read more about the function of salt in baking, go here.

To learn more about salt and your health go to the WHO web site and this article by the Harvard Medical School.