Here’s a quick timeline of the History of Bread: From the first flat bread and ovens, to sliced breads and bagels and everything in between.

All of Your Bread Questions Answered

Why is bread put on the table at restaurants?

Many theories exist as to why restaurants put bread on the table. However, the old tradition of breaking bread is a way to show people they are welcome at your table. Having a basket of bread at the table is old fashioned hospitality!

Biga is a mixture of flour, water, and yeast that is allowed to sit and ferment overnight. It is used by Italian bakers as a key component of Italian bread, ciabatta, and focaccia. Adding a little Biga to your dough will give the characteristic holes and crannies typical in artesian bread!

What is the most popular type of bread in the US?

According to Amazon, the e-tailer’s number one selling bread is King’s Hawaiian.

While eating your bread crust will give you points for not wasting food, it has not been proven to curl your hair no matter how much you eat.

Holla if you love Challah bread! Why is it braided?

Challah bread is traditionally served in Jewish homes on Friday night and the start of the Sabbath. The reason it is braided is to show unity. Sabbath brings unity allowing time for family, friends, and relationship strengthening. All the different strands of the Challah are braided into unity of one loaf. Other theories are out there but one thing is certain, Challah is delicious!

Why do I crave bread when it snows?

Stocking up on the essentials to weather a storm is part of our psychological make up. Bread shelves are emptied when severe weather is forecasted on the news. Bread is known as a comfort food! Other items we stockpile when it snows are eggs, milk, batteries and water.

Why are hot cross buns baked on Good Friday?

Hot cross buns baked on Good Friday are said to contain more magic than calories! Early superstitions around the buns claim they have the power to ward off evil spirits if placed in the home, will never stale, and sailors who take a hot cross buns on their travels will be protected from to shipwreck. Hot cross buns baked at other times of the year do not have any magic.

Where did Pumpernickel get its name?

There are many theories on how the German rye bread was given the known name as pumpernickel.  One theory is based on the translation of the word. The German word “pumpern” means to break wind. The second part of the word “nickel” is thought to be derived from the name of a goblin or devil like character popular in German folk lore: Nicholas. Pumpernickel can be loosely translated as the devil’s fart which may reflect the difficulty some have digesting the bread.

Can sharing a loaf of bread make you fall in love?

According to folk lore in parts of Norway, when a loaf of bread is shared by a boy and a girl they will fall in love and get married. It is destiny!

Is it true that sliced bread was banned?

Fortunately, this was a short lived war time measure from January 18, 1943 to March 8, 1943. The ban on selling sliced bread was intended to keep bread prices low when flour prices increased by 10%.

Fry bread is so delicious! Where can I find some?

Is it safe to eat moldy bread?

When you see mold on your bread you are only seeing the spores and fruiting bodies. Your loaf of bread may have millions of mycelium, thin thread like roots, running throughout, but invisible to the eye. The USDA recommends discarding moldy bread and baked goods. Mold has been shown to cause allergic reactions and respiratory problems. Eating moldy bread is not recommended.

Can I put my bread upside down?

If you are in France it is a big No-No to place a loaf of bread upside down on a table. The French consider this a sign of bad luck.

What do you call the end pieces of a loaf of bread?

Heel, butt, and crust are common names for the ends of your loaf. In the US it breaks down like this:

Which bread is better – French or Italian?

Hmmm, I think we better let you answer this one! 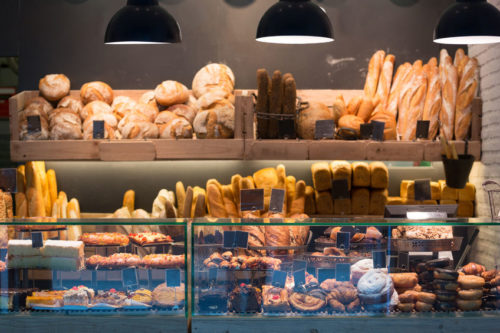